FOOD FOR CONCENTRATION AND COGNITIVE FUNCTION 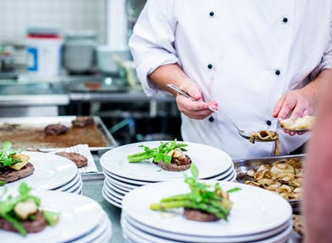 The impact of poor nutrition on obesity and associated chronic diseases is well established. However, evidence suggests that the quality of a child’s diet not only has a considerable impact on their weight and long-term health – but also their ability cope with the behavioural and academic demands of nursery. A well-fed brain is more likely to lead to good behaviour and improved learning outcomes.

Food for the brain

During the first two years of life, a child’s brain develops rapidly. Nutrients play an important role in this development process, acting as energy sources, structural components and precursors to neurotransmitters (the brain’s chemical messengers). Children who don’t receive adequate nourishment during this critical period are therefore at risk of a range of cognitive problems including slower language, lower IQ and poorer academic performance in later childhood.

The role of nurseries

Young children in full childcare receive up to 90% of their daily food intake from nursery meals, making it crucial that nursery food provides the right balance of nutrients to support their learning and concentration.

So which nutrients are particularly important? And where can they be found?

60% of brain weight is fat, so it’s no surprise that deficiencies in certain fats can have a huge impact on intelligence and behaviour. Most of the connections in the brain are laid down by the age of two, so around 50% of a child’s total calories should come from fat during this period to ensure optimum brain development.

Almost half the fat in the brain is docosahexaenoic acid (DHA), a type of omega 3. DHA helps support the transportation of signals to and from the brain and forms the basis of memory. Studies suggest that children who eat foods rich in DHA therefore display improved recollection skills.

Found in: DHA is not produced by the body in significant amounts, which means it must be obtained through diet or supplementation. The most effective omega 3 fats occur naturally in oily fish such as salmon trout, mackerel, herring and sardines. For those who don’t like fish, flaxseeds and walnuts are also good sources.

Zinc is important for the hippocampus – a region of the brain linked with learning and memory. Low zinc levels have been linked with fussy eaters and the development of ADHD. In turn, improving zinc levels in children with ADHD has been shown to reduce symptoms of hyperactivity, impulsivity and impaired socialisation.

Found in: Meats such as lean beef and poultry, dairy products (including yogurt and cheese), nuts, seeds, beans and pulses.

Iron deficiency in 1-2-year-olds has been linked to poor concentration and long-term learning and behaviour problems. Research suggests that around 85% of children with ADHD have low iron levels (compared with just 18% of children without the condition).

Magnesium is used to produce the neurotransmitters involved in attention and concentration, and has a calming effect on the brain. Deficiencies amongst children are common.

Choline is a nutrient involved in the production of the neurotransmitter acetylcholine. Acetylcholine is important in the creation of memory stem cells, and therefore helps to boost memory.

Found in:Beans, brussels sprouts, broccoli, cauliflower, yogurt, tofu, buckwheat and lean beef. Egg yolks are also a great source of choline, but should not be given to children until 8-9 months.

I know you're busy, but let's take some time to talk about what you'd like to be eating. Everyone's dietary needs and styles are unique. Drop us a line, and we can figure out what sort of a meal plan works for your goals and lifestyle!